Technological methods and new nanocomposites made from semiconducting silicon-organic polymer poly(di-n-hexylsilane) PDHS and poly(methylphenylsilane) PMPS incorporated into nanoporous silicas with different pore diameter and geometry are developed. Controlled increase in silica pore diameter from 2.8 nm to 10 nm allows to investigate for the first time optical properties of polymers during transition from isolated polymer chain to polymer film and to establish possibilities of controlling this process. It’s revealed that significant influence of confinement effects on the studied spectra is a result of competition between two types of interaction: the polymer to the pore surface and molecular interaction between polymer chains. For the first time it’s shown that as a result of competition of these interactions formation of new polymer structures inside pores takes place, which is not observed in films and solutions. It is proved that three new polymer forms with gauche- and trans-conformation of polymer chains and their aggregates appear inside the confined volume of nanopore. The presence of two thermochromic transitions for nanosized PDHS is revealed which differ significantly from transitions in the polymer film and solution.

Significant reduction of luminescence relaxation processes in nanocomposites is confirmed and luminescence efficiency 1.5 times increases at room temperature compared to the efficiency for polymer films due to the effects of orientation and confinement inside nanopores, opening wider prospects for their use in optoelectronic devices compared to films of polymers.

Existence of two spatially separated centers with different distribution of segment length in the polymer, and emergence of two liquid crystal phases as result of orientation of polymer chains are shown.

Energy spectrum of traps in PDHS was studied by our new modified method of fractional thermal luminescence, which has significant increase in energy resolution compared with traditional methods and allows to obtain correct values of traps activation energy. For the first time it’s proved that majority of PDHS fractional energies form a system of horizontal shelves depending on temperature, indicating discrete energy spectrum of traps. The results are systematized on the basis of our model of carriers release from traps. 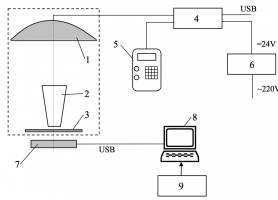