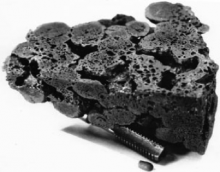 For the reason increasing of metallurgical value charge materials domain production was researched possibility of the reception partly metallize pallets from ore-flux-fuel composition. As main raw material was used iron-ore concentrate Inguleckogo GOKa (64,7 % Fe), with additive coke breeze of fraction 0-3 mm and quicklime, which then mingled and were granulated on plate granulator. Got pellets (with 12-17 % dispersed carbon) after fixing on surface defensive layer by thickness 2,0-2,5 mm from mixture of the concentrate and quicklime (1:1) mingled with solid fuel. The fuel was characterized by certain functional distribution in layerwise system: an activate fuel 0-3 mm, in clearance between granule – main or works 3-7 mm and more large – 7-10 mm, as fuel of curing.

Need worker layer of the solid fuel is dictated, as minimum, two circumstances. The first – a creation corresponding to is hawed a temperature-heat mode of baking and metallized of the granules. Second – a creation reconstruction-heat mode. The fuel substrate as a whole executes the role of the external source of the heat with controlled composition of heat-carrying. At achievement of the temperature in layer 1423-1473 K (in zone of the combustion 1595-1613 K) is conducted endurance under minimum amount of the air, given in layerwise system, with the following cooling of sintered material.

The called on experiments on given methods has shown the possibility of the reception during 35-40 min. partly metallize charge of the material at presence in kernel of the granules 12 % carbon and height sintered layers 4-5 d granules, which are situated between workers (generative) layer fuel.

The realization designed technological scheme on conveyor roasting machine at height sintered layer 0,25-0,3 m in mode filtering under of depression 200-400 mm.wat.col. allow to get hybrid agglomerate iron-ore material in the manner of druse with remaining carbon for the following domain redistribution, sufficient «cool» toughness, degree to metallize 30-35 %, output suitable 75-80 % and reduction of the expenses of the natural gas in 1,5-2,0 times. 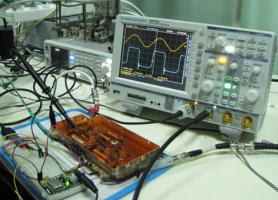