The theory of processes of hydrodynamics and heat and mass transfer is developed at a direct contact liquid and gas phases in the special terms of running bubbling layer, worked out by authors, that will be realized at a simultaneous serve in the tubular reactor of smoke gases and cooling water. In such reactor in the conditions of a limit space the relative high-rate of gas and liquid will be realized at providing of intensive interfusion of the last and continuous taking of the heated liquid from the active zone of reactor.

On the basis of research of the field of temperatures in the active zone of an experience pin vehicle the optimal values of geometrical and regime parameters of active element of pin vehicle are certain with a running bubbling layer, at that the minimum resource-demanding of vehicle is provided at set heating capacity.

Summarizing dependences are first got for mid-coefficients warm - and mass transfer at cooling of steam and gas mixture in a running bubbling layer.

Methodology of thermal calculation of pin the utilizing of warmth of steam of gas mixture is worked out with a running bubbling layer, and structural charts of perspective utilizers of warmth of of waste gases of power equipment. 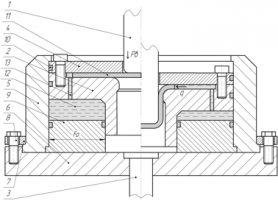