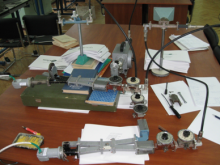 Sense of work consists in the analysis of modern world progressive trends of wireless communication networks (WCN) with distributed antenna systems (DAS) and also development of methodology of WCN with DAS functioning effectiveness increase on the basis of methods of spatial-temporal processing (STAP) of radio signals.
The aforementioned methodology is based on three new methods of increase of basic indexes of quality of WCN with DAS functioning (signal-to-noise plus interference ratio, probability of bit error, spectral efficiency of radio channel). The first method is a position of subscriber location on the basis of methods of STAP in the area of action of the proper radio module of the base station. The second method is application of STAP on the basis of the physical phenomenon of focusing electromagnetic energy (EME) in the area of subscriber location. The third method is application of STAP based on spatial-temporal matched filtering in DAS.

For realization of the first method new technical solutions are offered on the construction of phase direction-finders and phase systems of determination of coordinates for WCN with DAS. This must allow to determine which radio module of DAS must connect to subscriber, that in turn will allow to optimize work of WCN and increase the capacity of subscriber channel by forming of directed radiation in the case of the use of adaptive arrays as antenna elements of DAS.

For realization of the second method the algorithms of organization of the three-dimensional-directed radiation (focusing) of EME are synthesized in the area of location of subscriber. Also algorithms of information transfer between the base station and subscriber during work in the mode macroscopic DAS with the use of narrow-band and wide-band signals developed. This allow for each of subscribers in the area of their location to form maximum of EME (focus), thus minimizing co-channel interferences to other subscribers.

For realization of the third method the algorithms of organization of the multichannel three-dimensional-directed transmission of signal based on spatial-matching filtering for the great number of subscribers of DAS are synthesized. Algorithms of information transfer between the base station and subscriber during working of DAS in the mode of macroscopic DAS with the use of the special type of the orthogonal code sequences are produced.
Recommendations are developed on planning and optimization of cellular radio networks with DAS for telecommunication companies and operators. 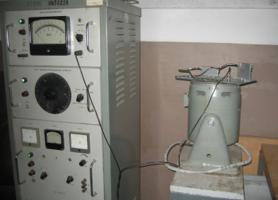