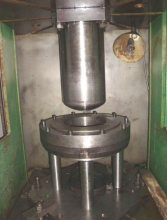 For processes of reducing tubular and hollow bottom blanks were used the application of liquid back pressure to the inner surface of the blanks and reducing was applied in the die of special profile. Calculation found that counter-pressure application with reducing of tubular of steel billets leads to the exclusion of loss of stability of the preform wall and forming of the cross-ribbed on the wall and on the deformed part of the workpiece, which allowed to obtain products with the neck in one transition. During reducing was applied cone and spherical dies of special profile. In such dies deforming surface is formed by the intersection of the circles of constant diameter whose centers are positioned at an angle with a certain step. Forming on these surfaces ensure the reduction of the friction forces in forming and increasing the degree of deformation in one transition. Using the pre-operation profiling wall of tubular or hollow blanks with the bottom results in reducing products of constant wall thickness. Prototypes of products was obtained by experimental way. Was founded the analytical dependences for determining the reducing force, the shape and size of the deformed part of the blanks.

For various configurations of flanges on tubular workpieces and pipes was developed method of bulging by punch of special profile. At such punch deforming surface is formed by the intersection of the circles of constant diameter whose centers are located at an angle to the corresponding step. By computer simulation was found and confirmed by experiment punch profile, which provides a reduction of the friction forces in the forming in the bulging processes and increase the bulging ratio. 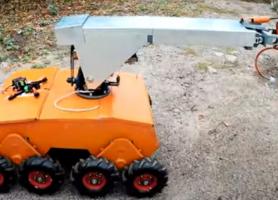