Nanoparticle surface dynamics in the diffusive modes of transformation, development of methods of controlled synthesis and regulation of nanoobjects selfarrangement processes

Methods for morphology control in a process of nanostructures growth by deposition of atoms diffusing from solution to the forming surface are developed. Surface restructuring is considered, yielding morphologies of interest in catalysis. Shape selection for nanoparticles and surface nanostructures occurs in appropriate "nonequilibrium" regime of properly balanced rates of various processes. The main factors of controlled synthesis are temperature of the system, concentration of free atoms which form nanostructure, and environment in which material transport between nanoobjects takes place. Morphology dynamics of nanoobjects in case of topological reactions during sintering is investigated, which is the basis for conductive films formation in microelectronic modules.

We’ve developed a new method of non-adiabatic dynamics in extended molecules when nuclei movement significantly affects state of electronic system. A semi-classical method is proposed, where nuclei are represented as wavepackets, which, although moving according to classical equations, accumulate complex valued phase factors during random transitions between different adiabatic potential energy surfaces. The principal advantage of our method is that after implementation of a series of random "trajectories" of the entire system (tens of thousands) it is possible to reconstruct its wavefunction and to determine system properties even in case of interference effects, which is inaccessible for known methods. Problems of the developed method improvement are considered. 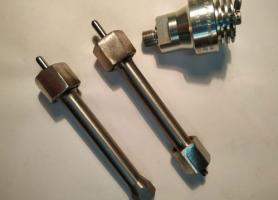