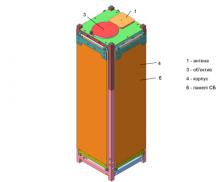 The work is devoted to the creation of a nanosatellite (CdS) format Cubesat, 3U by developing, modeling and researching efficient service subsystems to provide a payload - an opto- electronic scanner with a capability of shooting in the range of up to 30 m when it operates in orbit at altitudes up to 700 km.
The above works are carried out by the students of the undergraduate, postgraduate students and research staff of the following faculties: TEF, PTF, FEL, FAA, PBF and MMI, as well as attract specialists of PJSC "Pivdenne" (Dnipropetrovsk) as consultants.
Within the framework of the work carried out: development of the design of a nanosatellite with the use of cellular panel heat shields, thermal regulation coatings and a miniature pipe in order to completely exclude energy costs to ensure optimal thermal mode of operation of the satellite equipment; development of a payload - an opto-electronic scanner; development of the subsystem of radio communication with a high-speed channel (up to 800 Kb / s) "Bort Land" and carrying out of experimental ground tests. A number of applied theoretical problems concerning the development of a perspective class of space optoelectronic systems (EOS) of remote sensing of the Earth (RSZ) of the visible range of the spectrum are solved in this work. Within the framework of the work, the substantiation of the composition of the subsystem radio communication of the nanosatellite with the high speed channel (up to 800 Kb / s) "Bort-Land", the development of the principle of its construction, as well as software development. The physical and technical bases of work were created and new structural and technological solutions for the production of solar cells with silicon photodetectors were proposed. The physical and technical bases of technologies using nanocrystalline silicon have been developed and tested, in order to increase the operational characteristics of photo receivers and improve radiation stability.
The subject of work for today is relevant in the world and is aimed at the use of nanosatellites in the Cubesat format for the remote study of the Earth and its atmosphere. In this work, the accuracy of positioning in orbit up to 5 m and the shooting of the Earth's surface with the ability to 30 m with a mass of a nanosatellite up to 5 kg is obtained, which corresponds to the level of world analogues. The object of research and development is a nanosatellite (hereinafter referred to as NA) format 3 U CubeSat, including the design of the backbone and skeleton of solar panels, an opto- electronic scanner, the process of formation of information in the space television camera, high-speed radio and receiver signals from international satellite navigation systems.
Subject of research and development are:
- methods and methods for minimizing the mass-dimensional parameters of nanosatellite structures, methods for optimizing the formation of raw data for the cyclograms of the work of the systems of the National Assembly, taking into account energy constraints for each of the subsystems of the electronic platform, and means for maximizing the energy reserve of the nanosatellite, which will increase the resource of its operation in orbit,
- circuit design and design solutions of the on-board television camera to provide a given spatial and energy separation,
- circuit solutions for optical systems of the scanner and on-board receiver transmitter of the radio communication channel,
- navigation subsystem for the NA in the near-Earth orbit with the receiver GPS / GLONASS, the subsystem of the orientation of the National Assembly,
- subsystem of high-speed communication with the ground station with the AX.25 and FSK modulation data exchange format. 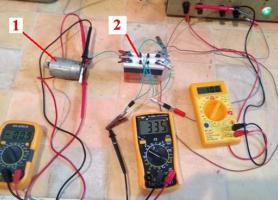