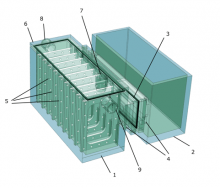 It is developed the anaerobic-aerobic technology of treatment of highly concentrated wastewater associated with biotechnological production of electricity and hydrogen. The technology is different from the existing ones with the implemented system of bioreactors. It is developed the hydrobiocenosis of microorganisms that are organized in bioconveyor and immobilized on synthetic carrier with highly developed surface area in bioreactors. In addition, the anaerobic treatment stage is proposed to be integrated with bioelectrochemical system that allows generating of electricity and hydrogen with the help of microorganisms and their enzyme systems. Thereby the competitive combined system of electricity and energy sources simultaneous with domestic and industrial wastewater treatment is developed.

The advantage of the technology over existing are in improvement of the removal efficiency for wastewater with high concentration of organic contaminants, reduction of energy consumption, reducing the the volume and costs of construction, the possibility of energy biosynthesis (electricity, hydrogen and biogas).

Through the use of synthetic carriers with advanced surface on which the microorganisms are immobilized anoxic and aerobic bioreactors achieved high oxidizing power and as the result reducing of their size 5-10 times compared to classical aeration tanks. Compactness of bioreactors can reduce the area facilities and reduce the cost of their construction.

Mediatorless exoelectrogenesis is the basis for electricity production and synthesis of hydrogen. Thus, the anaerobic microorganisms-exoelectrogens can transfer electrons directly to the electrode (anode) resulting in a potential difference between the electrodes and allowing the production of electrical energy from the potential difference is the biological electrochemical processes under anaerobic and aerobic conditions.

Also it is demonstrated the possibility of using wastewater of milk plant to produce biohydrogen. Hydrogen production using whey as a model material occurred on the way acetate production and has the yield about 1.2 mol H2/g COD. Immobilization of microorganisms increases the yield of hydrogen.

The experimental apparatus for anaerobic-aerobic wastewater treatment was developed and tested in real proceedings. Laboratory microbial fuel cells for energy carriers generation and for selection of inoculums of association of microorganisms with high exoelectrogenic activity were also developed and tested. 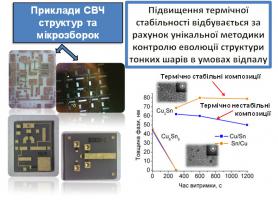