The equations of thermal balance for system « space vehicle – device – thermocontrol system – the space environment» for the thermosensitive device are elaborated with the account of heat transfer, which heat pipes realize. On basis of the analysis of these equations for device boundary conditions a new thermal concept of creation of effective thermal control systems of electronic devices with gas-regulated heat pipes is offered and checked experimentally. The system is passive, uses only own thermal emission of the device for function and allows to narrow a range of temperature change of the device to 5 – 10 K at the temperature level of 290 K at change of heat generation in 10 times, change of the mounting places temperature 253 – 323 K at external thermal loadings up to 270 W/m2.

The new thermal design of the passive radiation thermocontrol system for cooling from one to four charge couple devices of the scientific optical systems at the temperature level of 213 – 243 K is also created, which allows to transfer a heat to the radiator by a heat pipe on distance of 0.5 m and raises the thermal efficiency of radiator to 0.9.

The developed programs and methods of ground working-up of thermocontrol system designs with heat pipes enable to conduct testing of such systems according to the European standard “Heat pipe qualification requirements”, PSS – 49 (1983), that will promote the thermocontrol systems of the Ukrainian production to the European market of equipment for scientific researches.

With the use of the elaborated mathematical algorithm the results of 9-year successful exploitation on the near-Earth orbit of the thermocontrol system on basis of heat pipes of the NTUU «KPI» development on German microsatellite BIRD are generalized. 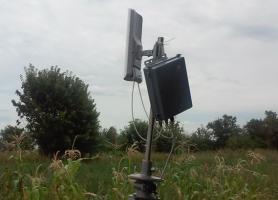