To ensure high performance and environmentally safe operation of the burner as a basis during its creation was elected tubular technology gas burning (TGB), which is based on the rational use of aerodynamic effects of flow in the nozzle Bordeaux is the basic building block. The choice of nozzle Borda as a basic element of the new technology of combustion of hydrocarbon fuels due to the fact that hydraulic and aerodynamic characteristics of the element facilitate implementation of the "canonical" principles of minimizing toxicity burners (pre-mixing, phasic combustion ramjet aerodynamic scheme). The intensification of the process of mixing and stabilization of the combustion process is due to the existence of a ring circulation flow (vortex stabilizer) that occurs in the nozzle Borda.

Tubular modules as stabilizers and angular pylons, forming the so-called regular fuel burning system, giving universal design burners. However, the use of tubular modules compared to the flat there is an additional stabilizers "linking" effect that promotes intensification of heat-mass transfer processes.

In multimodal performance burners is no need to install external modules in each nozzle, as in this case, there is a natural area of interface between adjacent modules that performs all the functions of positive external nozzle.
One of the special properties of flare systems based on tubular modules is their structural simplicity and technology combined with a variety of methods including mixing, diffusion, and the previous combined. 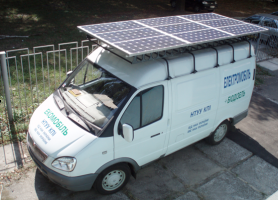