Physical and technological problems of creation of optical radiators and photodetectors, which use the phenomenon of electrical breakdown for its application in optical-electronic devices, are investigated. The usage of silicon carbide with its super-unique properties allows to solve the actual problem of creating of radiation stable, high temperature element basis for the systems of atomic industry, nuclear energy, military and space techniques. The feature of structural modifications of silicon carbide is presence, except basic periodicity, which determines the lattice constant of additional periodicity (superlattice), substantially changing the character of electronic processes in the large electric fields and also causes the origin of new effects, extremely interesting from the scientific and practical points of view.
The mechanism and features of influence of the nanosize crystalline overstructure on the electronic zone structure of different polytypies SiC and on the basis characteristics of electrical breakdown of р-n structures on the basis of mono- and nano-crystalline silicon carbide are develeped. It allowed to explain spectral and polarizational characteristics of separate micronic areas of local breakdown of microplasmas and their temperature dependence, crystallography direction of electric-field and to get from these data new information about the nature of basic bands of radiation. The character of energy distribution on the charge of high-energy carriers, intensity of ionization processes, correlations of electronic and hole-type ionising at the breakdown are determined.
The suggested model of "ideal" point source of optical radiation, for which new methodologies are realized for the first time and a detailed study of influence of technological factors, temperature, hard radiation on electric, fluctuational, electroluminiscent, polarizational characteristics are undertaken. The new technological methods of improvement of structure of breakdown of p-n junction produced with the help of Al3+ implantation in warmed up to 2000-2300 K film of SiC - 6Н are suggested. The perspective of creation on this basis standard broadband sources of optical radiation in the range of 250-1000 nm is proved. Laboratory standards of sources of radiation with subnanosecond pulses, high temperature and long-term stability are developed. 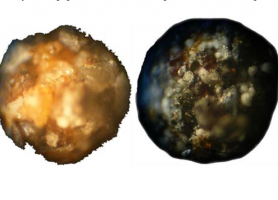