The multifunctional hardware-software system of diagnostics, physiotherapy and surgery for equipment of fixed and mobile medical centers. 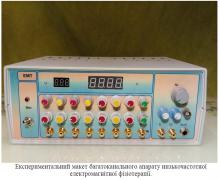 Development of technology and diagnostic equipment, low-frequency electromagnetic therapy and high-frequency electrosurgery for equipping stationary and mobile medical centers. An improved experimental sample of multichannel lowfrequency physiotherapy equipment has been developed. The device is an open type instrument capable of working with a wide range of different inductors in the frequency range from 1 Hz to 20 kHz and the intensity of the magnetic field in two ranges of 1...50 mTl and 10...500 mTl. The experimental sample of a multifunctional high-frequency electrosurgical apparatus with characteristics optimized for use in conditions close to field ones has been developed.
On the basis of new approaches based on the use of refined electrical models of organs and systems for the regulation of the human water balance, the theory and practice of measurements and the in-depth cumulative analysis of human bioimpedance parameters further developed the method of vector bioimpedance measurement, first of all, for determining the normal and critical state of the water balance of the human body, a prototype sample of the new version of the multi-frequency hardware complex for rapid measurement and aggregate analysis of all parameters (module, active and reactive components, phase angle) of human bioimpedance was developed and created, a method for determining the functional state based on the analysis of these parameters 4 was developed, which was verified under normal conditions of human life and in the critical state of patients in clinical hemodialysis.
The work analyzes the characteristics of the systems for the diagnostics the functioning of the heart in extreme states of the organism. As an example of an extreme state, the disease of myocardial dystrophy, which occurs after injuries of various origins, is considered. The complex method for studying of the cardiovascular system in extreme states was developed based on the detection of low-amplitude signals of the heart electrical activity by using wavelet analysis, decomposition in the basis of eigenvectors, and the principal component analysis. The developed technology for diagnosing the state of the cardiovascular system by evaluating the proposed integral parameters, which are determined with the help of a complex research method, allowed to detect myocardial dystrophy of different degree and area of lesion, with a local ordiffuse nature of manifestation. Numerical experiments on the study of electrocardiosignals of military personnel after a mine
explosive wound was performed in the work.
A new method for calculating the characteristics of central nervous and cardiovascular systems was proposed, which allows to use these coefficients as signs of a patient's state for classification. The state of the patient may relate to two classes: "before the attack", which corresponds to an attack that can occur within a sufficiently small time interval, and "between the attacks", which corresponds to a state, in which the occurrence of an attack for a certain time interval is not predicted. The ECG and EEG database of 20 patients was used, which was recorded during night monitoring.
The complex information-algorithmic support and software for system ofhighresolution electrocardiography and electroencephalography was created, which allows to determine and predict subtle manifestations of electrical activity of the heart and brain in extreme states of the organism. 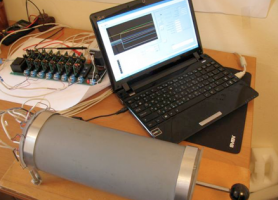