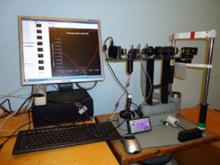 A device for determining of the distance to an object and its motion with non-contact method. Designed device also allows an additional function, namely, to measure the distance to the further point of clear vision of the human eye and to measure the value of eye refractive error. In this case this distance meter turns into ophthalmic refractometer.

The basis principle of the distance meter action is the use of the formula of Gauss. This formula establishes a relationship between the optical power of the optical system which forms an object image, and distances from the system to the object and to analyze the image plane of the object. To determine whether the optical interface of the object plane and the image plane of the analysis proposed to use a medium-square radius (RMS) on the light distribution function in the image of the light spot on the object. This spot is formed by the laser lighting system, which is part of the meter. Optical pairing is established on the basis of minimum of the RMS (a), where a - the distance to the object. The optical conjugation carried out by variolinza controlled with computer. Light distribution data extracted by a television camera with a quick video. RMS function (a) is reproduced by a three-dimensional image microphotometry of the illuminated object zone. 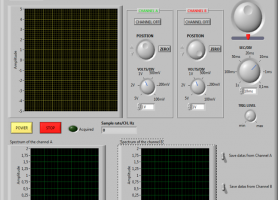