A new analytical model of ARTD kinematics, model of the dynamic behavior of the walking apparatus when moving on an arbitrary surface, has been developed a structural diagram, has been synthesized for the interaction of the robotic transport device systems with its nodes. Created computer models of kinematics and dynamic behavior work, shows the interaction of the executive bodies of the ARTD with its sensory system through the environment. A unified virtual system (UVS) and a structure of its interconnection with the ARTD, software and hardware for the terminal message of the UVS and the environment, as well as an interface for interaction with physical units, have been developed. Developed a strategy for dynamic sustainability of the ARTD, a mathematical description of its observance and recovery in handling cargo operations, a resilience control system (CS) as a hierarchical distributed structure for controlling the robot's movement, which includes three structured levels — intelligent control of robotic transport device, level of program control patterns and level of regulators interacting with each other. The architecture and algorithms of the integrated control system are developed by the movement of the manipulators, which coordinates their movement with the movement of the body and the movement of the limbs, and its speed is in turn synchronized with the movement of the transport trolley. CS was developed by robotic ransport device movement on a trajectory, as well as algorithms for its optimization taking into account the stability of work and the possibility of correcting a given trajectory using the developed special control channels. A draft design with recommendations for creating an ARTD layout was proposed, computer simulation of the performance of the ARTD actuation devices and sensors in the environment of a computer test bench was carried out. 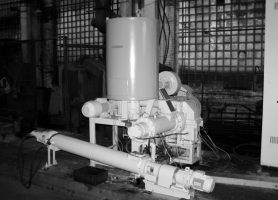